Hamstrings are so hot right now! 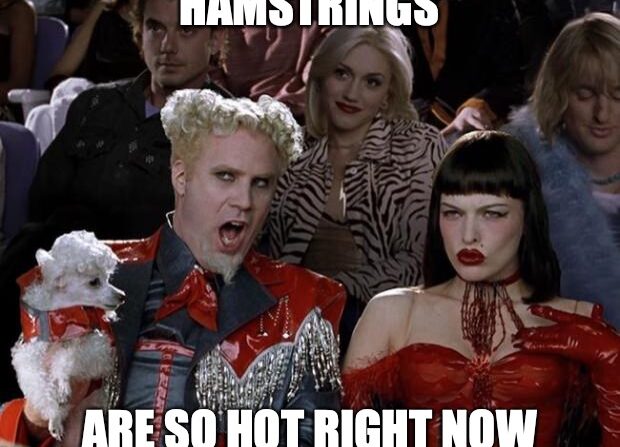 Hamstrings are so hot right now!

If you’ve been a member of Benchmark, you’ve been force fed a diet high in hamstrings for quite some time now.

This is one of the reasons why we see members develop so well when they start our system of training.

It seems the importance of the role the hamstring plays is penetrating the S/C and PT world which is awesome to see. We would like to share some of our insight and thoughts on how we hit the hammies.

Of course, the hamstrings are the big, beautiful muscle at the back of the thigh consisting of bicep femoris, semi-membranosus and semitendinosus.

The hamstring has multiple attachment points from the pelvis to just below the knee, main movement it effects is knee flexion and hip extension, but you can get so much more out of developing your hamstrings.

Some considerations when playing with hamstring training:

Fluctuate sets, reps’ percentages like any other major muscle groups. Smash some heavy ass reps as well as going to dark places and smashing some volume, all within designed programming phases of course.

Proximal fibers refer to the top portion of the hamstring near the butt and distal, being the fibers closer to the knee. Both need to be developed but commonly, proximal fibres are heavily underdeveloped. Therefore be sure to include movements  that provide sensory feedback of the proximal fibers.

Strength movements for the hamstring are endless, depending on your creativity. Majority of our programs include a hinge, hip bridge and a hamstring curl (as demonstrated in the videos above). There are many variations to play with including, bilateral, unilateral, staggered, short and long leaver positions, supported, unsupported, low load – high velocity, high load – low velocity etc.
Movement selection and variation will be limited only by what you’re trying to develop and your creativity.